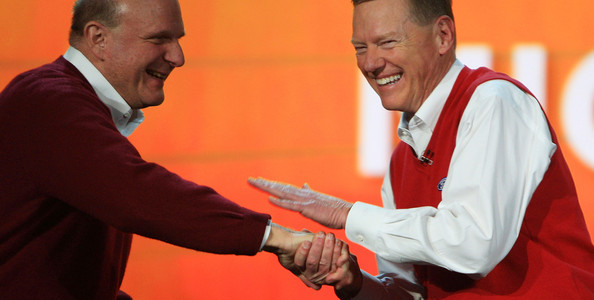 on October 7 | in All, Investing, Stock Market | by Daniel Trevisani | with No Comments

Known the departure of Steve Ballmer, Microsoft evaluates hypothetical successors. Alan Mulally CEO of Ford is, for now, one of the most probable successors of Balmer.
After “Bloomberg” have reported last week that Microsoft is evaluating the name of the current Ford CEO Alan Mulally, as a possible replacement for Steve Ballmer, who is leaving the CEO of Microsoft, this Monday various media confirm this possibility.

“Bloomberg” says that the Board of Directors of Ford will meet this week to discuss the future plans for Mulally. The “Corriere della Sera” remember that this is a sensitive issue for Ford since its foundation only ten people had led the destinies of the American manufacturer.

“This decision can not simply be left hanging for a long time”, says the external consultant from Ford and General Motors, Maryann Keller, quoted by “Corriere” .

In addition to announcing that Ballmer will no longer be the CEO of Microsoft, its ability as a leader has been questioned because of the increasing bad results the company has presented. For example, the CEO of Microsoft will only receive 40% of the 2013 bonus, due to sales of computers and tablets below expectations.

Check the crazy moments of Ballmer as Microsoft CEO: « Vodafone and Verizon close third largest deal ever The top 10 companies to work for, in 2013 »