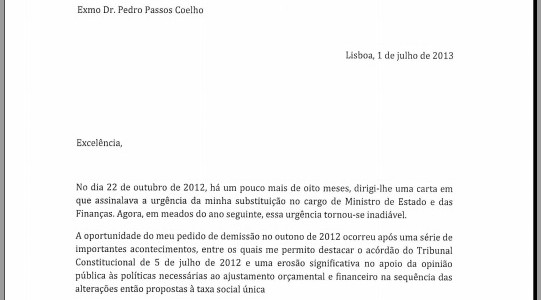 on July 4 | in All, Economy, Europe, Markets | by Guilherme Neto | with No Comments

Portugal is going through one of its most severe economic crisis since their acceptance into the European Union back in 1986. All we can say right now is that July couldn’t have started in a worst way for the Portuguese economy, with Vítor Gaspar (Portugal’s Finance Minister) resigning after presenting a goodbye letter to Pedro Passos Coelho (Portugal’s Prime Minister). As if things couldn’t get any more dramatic, Paulo Portas, the Portuguese Foreign Minister and theoretically the second most powerful man in the current government, has also submitted his resignation this past Tuesday.

The markets didn’t take too long to react and Portugal‘s debt interest rates immediately raised substantially in the hours after these news came to light. The main Portuguese stock index (PSI-20) plunged around -5.31% this past Wednesday, with several of the big banks holding most of the responsibility in that fall. Banco Espírito Santo (BES) dropped 10.95%, Banco Comercial Português (BCP) has fallen -12.9%, and Banco Português de Investimento (BPI) saw their shares losing -8.44% of its previous day value. This Thursday and Friday are being waited with great expectation by many investors and there are strong possibilities that the Portuguese president Cavaco Silva may dismiss the current government and call for new elections.

In the meanwhile, we translated the now former Portuguese Finance Minister Vítor Gaspar goodbye letter to English and you can read it in its full form just below: In the past day of October 22 of 2012,  nearly a bit more than 8 months ago, I’ve sent you a letter where I made note of  the urgency in replacing me as Portugal’s Finance Minister. Now, in mid 2013, that urgency simply can’t be delayed anymore.

The timing of my last resignation request during the Fall of 2012, took place shortly after a series of important events, from which I would outline the ruling from the Constitutional Court of July 5, 2012, as well as a significant lost of the public opinion in regard to the necessary politics and measures to assure the proper budget adjustment, following the suggested changes to the “Single Social Tax” (“Taixa Social Única” [TSU] in Portuguese).

During an external funding crisis, I’m convinced that the country in borrowing country must initially give priority to the restore of the fiduciary relationship between the official creditors and the private ones. In case a stable agreement isn’t found, the debtor party will necessarily face severe economic and social consequences. By the time the current government was elected, we were in desperate need of recovering the trust from our external creditors, due to the urgency of the situation we had in front. Today, I’m confident that the efforts should be made towards the preservation of that mentioned trust, due to the results we’ve achieved so far.

The resemblances between the Fpring of 2013 and the Fall of 2012 are remarkable and quite clear. As you well know, I thought my resignation was the only possible outcome after that second negative ruling from the Constitutional Court. I’ve been asked to pursue with my work in order to ensure the conclusion of the seventh regular exam, the extension of the payment deadlines from the official European loans and the preparation of the amending budget, required after that decision from the Constitutional Court. Having all this in mind, I ended up accepting to continue with my job, due to the dramatic situation the country would be diving into if those tasks weren’t to be accomplished.

The seventh regular exam is now officially finished. The extension of the payment deadlines from the official European loans was already agreed. The amending budget was already approved. The financing conditions for our Treasury and the Portuguese economy have improved significantly. The investment can now recover based on the trust earned from the “entrepreneurs” and businessmen. My resignation, and allow me to repeat myself, is now unavoidable without further delay.

I would like to point out that only after the “Extraordinary Council of Ministers” of May 12, I received a clear mandate from the government that allowed me to carry on with the conclusion of the seventh regular exam (which occurred immediately after, on May 13). The lack of a mandate to finish the seventh regular exam in proper time doesn’t allow me to keep leading a team that is responsible for negotiations that aim at protecting the best interests of Portugal.

In any resignation letter it’s essential to consider first and foremost our own limitations and responsibilities. The failure in achieving the original goals of the deficit and debt program in 2012 and 2013, was determined by a very pronounced fall in the domestic demand and by a change in its composition that led to a heavy drop in the tax revenues. The repeating of these same deviations ended up compromising my own credibility as a finance minister.

The great costs of an adjustment are in their essence inescapable, given the depth and persistence of what goes wrong structurally and institutionally, and which ultimately lead us to a budgetary and financial crisis. However, both the unemployment and youth unemployment rates are in very worrying levels. They demand an urgent and strong response not only in Portugal, but in the whole Europe. We’ve been asked to quickly switch to a different stage of the adjustment: the investment stage! This step requires credibility and trust. These are unfortunately two elements which I can’t see myself able to provide anymore. The success of an adjustment program demands that every single person responds for their own responsibilities. That being said, I have no other alternative than to assume the responsibilities that were given to me, in their full extent.

Leadership is, at least sometimes, defined as wisdom and courage combined with no self-interest purposes. When a leadership is carried under these premises, we can be sure that a country’s major interests are being protected from one generation to another. It’s easy to say it, hard to accomplish it, in particular when we are surrounded by a deep crisis of several dimensions: budgetary, financial, economical, social and political. As I’m sure you’ll be able to count with the intelligence, courage and determination of the Portuguese people, it’s now up to you to lead them. To assure the internal conditions for the necessary adjustment are part of this task, just as it is to make sure that we hold on to an encouraging external credibility level. The upcoming risks and the challenges are enormous. They demand our government to be strong and united. It’s my firm belief that my resignation will help to strengthen your leadership and the union of our government body.

On my behalf, I can only thank the huge and priceless support you have given me in the past two years of an excellent cooperation we’ve had.

With friendship, loyalty and admiration, « How do Mutual Funds work? Bernanke statement drives US stocks up »